Together with Angelika Fuehrich, I am now at the end of my third week in Germany. Like most of us Lauderites, I have language classes every morning and cultural, business or academic related activities every afternoon. The first week’s theme was ‘From German Unity to European Integration: German Political Culture since 1990’ and last week’s theme was ‘Economic/Ecological Innovations: The Role of Sustainability and the Energiewende.’ The second theme particularly interested me! As an avid supporter of renewable energies, I was pleased to learn more about the successful German initiative from experts such as Sascha Müller-Kraenner, from Deutsche Umwelthilfe (DUH) in Berlin, and Prof. Dr. Bruckner, expert in energy economics

Another highlight of last week was the German start-up ECF Farmsystems GmbH, which has developed aquaponic farm systems that allow for the resource efficient production of vegetables and fish of the highest quality. It is a great alternative form of organic food production in urban areas. At the 2013 “Cleantech Open“, the world’s largest startup event in Silicon Valley, ECF won two Oscars: for best startup in the category “Agriculture, Water, Waste,” and for best startup “International”.

Next week it’s off to Istanbul, Turkey! I could not be more exited! Although, I wish I could have meet the Global Track in this beautiful city. I hope everyone is having a great time all over the world. With LauderLove, Stephanie 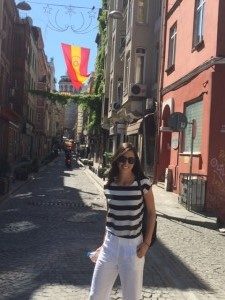 The post Updates from the German Program appeared first on The Lauder Blog.