The Lauder Institute’s commitment to diversity, equity, and inclusion (DEI) is central to our mission to develop outstanding business leaders. Our community comes from numerous countries around the world, and our students, faculty, and staff bring a range of valuable backgrounds and perspectives to the program.

Lauder students hold leadership positions in many clubs that focus on diversity efforts, such as:

Lauder Student Discusses a Unity and Diversity Conversation at Wharton

View from the Top: Female-Driven Leadership at Wharton

The Lauder Institute has long regarded the study of language, culture, and historical context as foundational to our broader inquiry into the development of social, political, and economic institutions, including their influence on the social construction of gender, race, and identity, and the implications for stratification and inequality. The Lauder program addresses these phenomena in myriad ways, including through discussion of gender inequality, LGBTQ+, indigenous peoples, and differences in welfare and well-being. At present, we are especially concerned with the social construction of race, the causes and consequences of racism, and anti-racist strategies for change.

2020 – Focus on Racism and Inequality

In light of recent events that have brought systemic racism to the forefront in the U.S. and around the world, in early Summer 2020 the Lauder Institute convened a taskforce with a mandate to drive progress in how we engage with issues of race and addresses the problems of racism and racial injustice in the U.S. and around the world, including in our own Lauder community. The Institute is committed to increasing Lauder students’ awareness of, and ability to engage effectively with, issues related to race, racism, and racial injustice, through our curricular, programming and community initiatives.

Lauder Virtual Pre-Term for the Class of 2022

Due to COVID-19, the Institute had to cancel the hallmark Lauder Summer Immersion. In its place, the incoming Class of 2022 participated in a virtual Pre-Term.

A. The Lauder Pre-Term Core

All Lauder students engaged directly with issues related to inequality and to integrate an explicit focus on the U.S., which had been relatively little addressed in the INTS core curriculum in previous years. The course introduced students to conceptual frameworks in the fields of comparative politics and political economy, as well as topics including implicit bias, culture, and identity, and students were asked to reflect on the institutional origins of inequality and injustice. In addition, students were able to attend a series of Regional Dialogues on Understanding Inequality, the first of which examined persistent socio-economic inequalities in the U.S. through a racial lens, and in view of historical contexts including slavery, reconstruction, and segregation.

A specifically-tailored Dialogue Series was a part of this course. Scholars and practitioners with regional expertise were invited to share their perspectives on inequality and racism.

During the inaugural dialogue on the United States, our guest expects spoke to persistent socio-economic inequalities through a racial lens. The conversation drew parallels between the historical precedents of slavery, reconstruction and segregation and the current political fragmentation in the country. From a historical and economic perspective, our speakers offered solutions to modern divides in the United States that included transformation in education and increased access to voting.

Many countries in Africa have seen encouraging growth over the last decade, but it has not translated to the creation of jobs. One of the continent’s anchor countries, South Africa, is regarded as one of the world’s most unequal societies. Our Africa conversation focused on teasing out how globalization and the legacies of colonialism, politics and development have contributed to societies where large percentages of the population still find themselves excluded from opportunity and resources for advancement.

Our final conversation on inequality in East and Southeast Asia explored the contrasting dynamics of inequality between China and countries of SE Asia. Our experts examined the precarity and vulnerability of the urban and rural poor in these regions and remarked on trends in social mobility. Both speakers shared how political institutions and government bureaucracies maintain socio-economic inequalities.

Our Europe inequality dialogue focused on deepening our understanding of how economic and political systems in the region have resulted in a rising inequality across all countries in Europe. Drawing from ethnographic examples and quantitative data our experts discussed how the COVID-19 pandemic is likely to exacerbate the growing health and economic inequities rooted in Europe’s class statuses, migration patterns, and racial and ethnic biases.

The conversation on Latin America and inequality explored a variety of drivers that lead to consequences like gender violence, discrimination of indigenous peoples, and poor health outcomes in the region. The experts shared how these inequalities are strained by the COVID-19 pandemic and how these play out at both macro and micro levels. They also discussed the effect of external actors, like the United States, on distribution of resources and the negative conditions of foreign aid.

Our conversation on inequality in South Asia, the Middle East and North Africa examined an increasing disparity between wealthy and poor in the region, mainly through a political lens. Among the many lessons of the institutionalization of inequality, we learned that India’s growing wealth disparities map against a legacy of caste and gender discrimination, in spite of shifts in legislation that promise opportunity for all. In the Middle East, trends in inequality are exacerbated by political and economic systems, entrenched by regimes which use inequality in the maintenance of authority.

B. Programs of Concentration Courses during the Lauder Virtual Pre-Term

The course content for all INTS Programs of Concentration (language classes, Africa classes, and Global classes) integrated issues related to race, racism, and racial injustice. Faculty worked to increase the amount and quality of this content. Some examples of thematic units addressed in Program of Concentration classes included consideration of the role of slavery in fostering U.S. economic development; the challenge of multicultural diversity to national identity; migration and globalization; historical origins of cultural traditions routed in a racial subjugation; religious sectarianism and power sharing; issues of identity and belonging; the intersection of gender and race; urban planning and racial politics; and more.

In the fall semester, Lauder faculty continued to focus on integrating themes related to racism and inequality. Students were been able to engage with those themes in a variety of instances and ways. Some notable examples include:

The second part of the INTS 732 Lauder Core Course included content focusing on how race and identity influence patterns of entrepreneurship, and more specifically, how minority entrepreneurship is impacted by institutionalized forms of discrimination and inequality.

B. Program of Concentration

In the INTS Program of Concentration classes (language/Africa/Global), faculty have designed their courses to increase focus on themes such as: redistributive politics with a focus on institutional and structural forces in the United States and elsewhere; identity and belonging in national contexts; understanding contemporary protests; responses to border division and racism through art, film and literature; and responses and resources to the pandemic crisis for marginalized communities.

In the INTS Program of Concentration language courses, students continued to work on a community outreach/cultural/research project, an initiative that was introduced in Pre-term 2020. These group projects encouraged students to use their target languages to understand local issues and cultures, and assist organizations where applicable. Some examples included: helping the YMCA support new immigrant low-income families; gentrification and its impact on the Puerto Rican community in Philadelphia; understanding the socio-cultural aspects of Frevo; and supporting digital literacy for Brazilian families in Philadelphia.

The virtual Global Leaders Series aimed to help Lauder students become more effective and responsible global leaders. Sessions centered on issues related to diversity, equity and inclusion, with a particular focus on race and racism. The goal is for students to improve their understanding as well as skills in addressing these issues, as it is critical for our community and our futures. 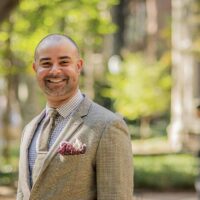 Over the course of the last several months, the world has been rocked with social unrest, highlighting systemic oppression, racism and inequality. Socially we feel this call to action. Before doing anything, we must lean into the discomfort of having “the conversation.” In this session, the group explores why conversations about race can be difficult and discusses strategies to have meaningful conversations. (Two sessions of “Managing Difficult Conversations” were held for Lauder faculty and staff as well as students.) 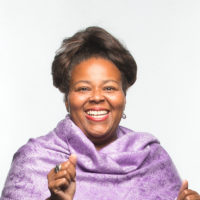 A Journey Advancing Diversity and Belonging in Today’s Organizations

Facilitated by Dr. Melissa Thomas-Hunt, Head of Global Diversity and Belonging at AirBNB, and Senior Global Fellow at the Lauder Institute

As Head of Global Diversity and Belonging at Airbnb, Melissa C. Thomas-Hunt leads the strategy and execution of Airbnb’s global internal diversity, inclusion, equity and belonging programs. This talk focuses on the factors that unleash, leverage and amplify the contributions made by individuals, particularly women, underrepresented individuals and numerical minorities. 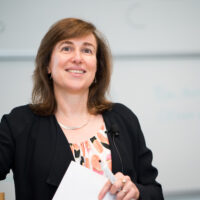 Unconscious Bias: What Is It, Why Do You Care, What Can You Do About It?

Diverse work groups can lead to stronger and smarter teams with better performance and decision-making skills. However, certain obstacles can affect people’s ability to leverage the benefits of diversity, including in hiring, promotion, and daily interaction. One such obstacle is unconscious bias: even though employers can take steps to avoid explicit bias, unconscious biases can still exist.

While preparing to begin Lauder Pre-Term, first-year Lauder students organized peer-facilitated discussions related to race in the U.S. The group met roughly twice a month, and the discussion revolved around articles and videos that reflect the differences in experiences in the U.S. Moving forward, students planned to continue this initiative through Unity in Diversity meetings and aim to have two events per semester related to topics selected by students.