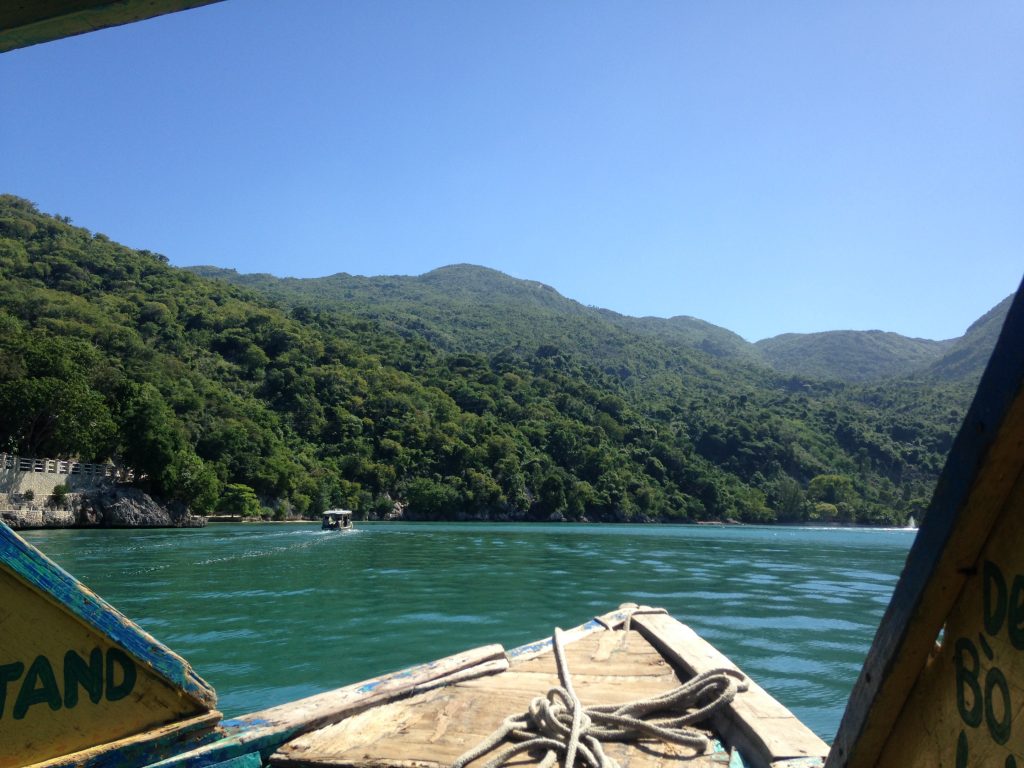 With graduation and Real Life’s obligations getting closer and closer, I decided to make the most of my winter break and take a trip focused on exactly what I wanted to do. I’m writing a Lauder research paper on cocoa farming, and I decided to start my research by exploring the Caribbean. My purpose: talk to cocoa farmers and chocolate makers about their work.

To find cocoa, I could go anywhere 20 degrees north or south of the equator. I speak French and I liked to idea of doing my own mini-immersion, so I booked a trip to Haiti. After a bit of thinking of how I could stretch my break out as long as possible, I added a ticket to Trinidad & Tobago. I scheduled my departure for the night classes ended and the end-of-semester craziness made it impossible to plan my trip, so I boarded the flight to Port-au-Prince with nothing beyond my first few nights booked and a list of potential contacts. On the flight I skimmed a guide book I’d over-nighted to myself (the best decision I made the whole trip) but I had no concrete expectations or plans for the next three weeks.

Once I arrived I started exploring the city, making a lot of phone calls and having conversations. I was initially confused by Haitian Creole—I didn’t understand what people were saying, and I wasn’t sure if it was because I’d forgotten all my French or because they were speaking a different language. And despite coating myself in eau de bug spray several times each day, the mosquitoes were giving me a very warm welcome. Most of all, I was surprised by how easy it was to meet people in the cocoa industry and how willing they were to talk to me about their businesses. Friends referred me to friends and my schedule quickly filled up beyond my own short contact list. I continued explorations of cocoa country in the south and north of Haiti, and at some point during motorcycle taxi rides through the countryside I realized I was finally doing what I really wanted to do. I didn’t have air conditioning and the internet connection was spotty at best, but I was tasting cocoa at its sources and seeing more stars at night than I’d ever seen in my life.

The next step in my cocoa journey was Trinidad & Tobago. I was academically more prepared for this leg of my trip with meetings set up in advance, but I completely surprised by the diverse and vibrant country I found. Trinidad was already gearing up for Carnival and soca music was playing from every bar and restaurant. While I met cocoa farmers, entrepreneurs and major exporters in Haiti, in Trinidad I found artisans making high-end chocolates from locally-sourced cocoa. Here I saw the potential to develop a thriving cocoa industry empowered by local production and consumption, an important conclusion that will play a central role in my final paper.

What most impressed me throughout my journey was the warm welcome I received at every step. Everyone I talked to in both countries was open, easy to engage and happy to share their experiences with me. This may be specific to the chocolate sector—it’s hard to be unfriendly when you work with such an exciting product. I’d heard quite a bit of security warnings about both countries and although I did get more attention as a foreigner, at no point did I ever feel unsafe. When I reached out for help, most people responded positively and I realized that as long as I didn’t rudely intrude into their space, I’d be left alone. This was my first extended solo trip and I spent the majority of my time accompanied only by my own thoughts. For first time in my life, I was actually waking up every morning and doing exactly what I wanted—in this case, tasting cocoa around the Caribbean. It was hard for me to come back to Philadelphia not only because I was leaving behind the warm weather, but because I know the clock is ticking on the end of my time at school. Now I must pursue a next step that will give me the same feeling of happiness and fulfillment I got from this trip. The pressure is on— let’s see what the next few months have in store!

The post In Search of Cocoa in the Caribbean appeared first on The Lauder Blog.