Rural Homestay
One of the highlights during our visit to Kenya was a 4-day rural homestay in the Tetu District, which belongs to Nyeri County. Each of us was hosted by a different family with whom we experienced rural Kenyan life. We quickly integrated into the family and became part of activities and conversations whilst also expanding our basic knowledge of Swahili. The area we visited is predominantly Kikuyu, one of the largest ethnic groups in Kenya, whose elites have historically been entrenched in the Kenyan establishment. We were introduced to how locals viewed the challenges of Kenya in the political as well as social contexts. We appreciated these authentic conversations, which helped us learn about the region through a non-academic perspective. Lastly, we noticed a strong sense of family and bond, which is nurtured by religion and faith. The rural homestay was an experience that significantly fostered our cultural sensitivity and helped us immerse further into the local society. 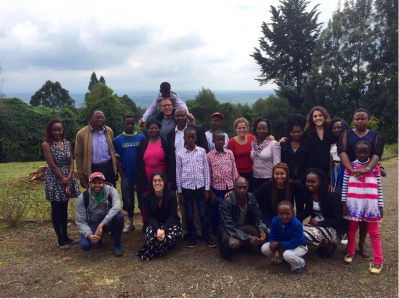 Internships & Field Projects
The last two weeks in Nairobi were spent participating in various internships. For one group member, the internship entailed interviewing a number of professionals in the Kenyan finance industry. While there were many interesting learning points, what surprised us most was the positive attitude among finance professionals regarding Kenyan skilled laborers leaving home to live and work abroad. We tend to think about Africans leaving their home country in negative terms, as the narrative is overwhelmingly focused on the notion of “brain drain.” But for some professionals, such as the chairman of the Nairobi Stock Exchange, skilled labor exportation is a good thing. He explained that there are an estimated 2.5 million Kenyans living abroad, whose contributions via remittances to the country have been on the rise, hitting KSH110 billion (about $1.3 billion). Whereas before these remittances were largely to help family members, Kenyans are now becoming keen investors in the securities market, as it offers higher returns than most developed markets. As a result of this trend, the Kenyan Central Bank created what is known as a Diaspora Bond that offers attractive yields. Through these bonds, more capital has been flowing to the country, which is boosting the local economy. 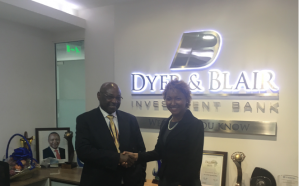 The Kenyan Coast
The coast of Kenya has a very different vibe from the center. First of all, the beauty is all in the beaches, from Mombasa to Malindi to Lamu, and beyond. It’s very different from the red soil and bush-driven beauty of the center. Secondly, the amount of Muslim influence is quite apparent, from the Indian and Omani architecture, the sounds of the Azan (call to prayer) wherever you go, and, of course, the food. Lastly, the people seem very different in their demeanor. They seem at peace, they seem tied to their own regions, and they all seem to share a strong disdain of the hustle and bustle and aggression of Nairobi. Lamu in particular is another world, a place where no cars go. The only forms of transport are donkeys and cars, solar power electrifies most of the region during the day, and all castes and creeds live together in perfect harmony. The new Lamu Port and associated oil pipeline is seen as a threat to the preservation of Lamu, and one can only hope that it does not damage the authentic experience that is Lamu.

The Kenyan Startup Ecosystem
The technology startup scene in Nairobi certainly lived up to its reputation. We had the chance to visit multiple startups, co-working spaces, accelerators, incubators, and investment firms. Our visits to iHub, Sanergy, BRCK, Gearbox and iLab gave us tremendous insight on the technology ecosystem in Kenya. Additionally, two students had the opportunity to work on a short project with Nest, a Venture Capital firm-cum-accelerator that invests and supports local startups. The students conducted a deep dive into the tech network in Nairobi, which allowed them to have inspiring conversations with key Kenyan entrepreneurs, angel investors, and companies like GrowthAfrica, Village Capital, NewGenAngels, and Seedstars, among many others. They ended the experience by drafting a report on the current startup ecosystem in Kenya and its major challenges, with the hope that Kenyan startup firms will address these challenges in order to make the “Silicon Savannah” the next Silicon Valley.

Kibera
Kibera is the largest urban “slum” (or informal settlement) in Africa, a fact that speaks to the stark inequality in Nairobi. The city has very rich areas, like Karen, where politicians and businessmen live in guarded, sprawling mansions. This can be contrasted with nearby Kibera, where “housing” is often temporary, small, and lacking access to running water and electricity.

We visited two NGO’s operating in the slum: Carolina for Kibera and the Red Rose School. Carolina showed us around a medical clinic and center for malnutritioned children, as well as the homes of two families they support. Walking around the slums, we experienced a range of reactions: sadness at seeing small children playing around in the mud, dirt and trash, as well as discomfort from walking around these people’s homes as a group of tourists. Even though we saw hustle and bustle throughout Kibera as people worked in their small informal businesses or made their way to work in the city center or neighboring Karen, the experience still left many of us feeling heavy-hearted.

The government does not take much responsibility to improve the conditions in Kibera, even though some politicians grew up here. Therefore, for now, NGOs are key players in improving conditions in this informal settlement and others. Regardless of their large population numbers, which begs the question of efficiency and effectiveness, for the time being, without organizations like Red Rose School and Carolina for Kibera, the situation would be much worse. Two of us worked at Red Rose School during a two-week field project, as a way to show our support for the work they are doing. Upon realizing the potential of the students and the lack of resources offered, we decided to set up a website for Red Rose with information about the program as well as a donation link in order to support the maintenance and growth of the school.