Stephen Kobrin, former director of The Lauder Institute and William H. Wurster Emeritus Professor of Multinational Management at The Wharton School, passed away on May 6. He was 83 years old.

Kobrin began teaching at Wharton in 1987 and was director of The Lauder Institute from 1994 to 2000 and from 2006 to 2007. A prominent scholar of global integration, globalization, and international political economy, Kobrin authored numerous books and journal articles. He served as president of the Academy of International Business, and at Wharton as chair of the Management Department. He was also executive director of Wharton School Press.

Kobrin earned his Ph.D. in international business from the University of Michigan, an MBA from Wharton, and a B.Mgt. E. from Rensselaer Polytechnic Institute.

“Steve Kobrin was an esteemed scholar of multinational management, a valued colleague, and an institutional leader who contributed to Lauder, Wharton, and Penn in multiple ways,” said Lauder Institute Director and Professor of Management at Wharton, Martine Haas. “He will be much missed.”

He is survived by his wife, Carol, his three children, and three grandchildren. 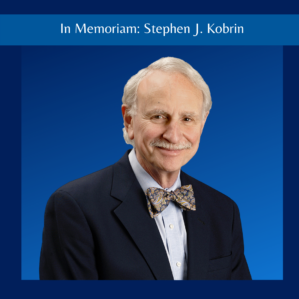