“Working for Latam Airlines and being involved in sports gave me the opportunity to be one of the torch bearers in Brazil. The reason I was pre-selected by Latam Airlines was because I was leading some projects for the 2016 Olympics. Later on, I wrote an essay for the Olympic Committee justifying my wish to represent my country. I also discussed my previous involvement with sports, particularly swimming and water polo competitions throughout my time in high school and university. The Olympic Committee selected me to be a torch bearer for the city of Londrina on June 28, 2016. The whole experience was amazing!”

After being lit in Olympia, Greece, the torch traveled to Athens on April 27. The torch began its Brazilian journey on May 3, and will visit more than 320 Brazilian cities before it arrives in Rio de Janeiro’s Maracanã Stadium, the main venue of the 2016 Olympics. 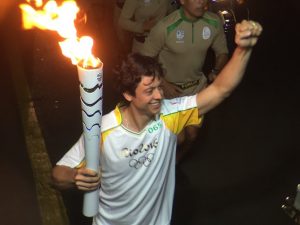