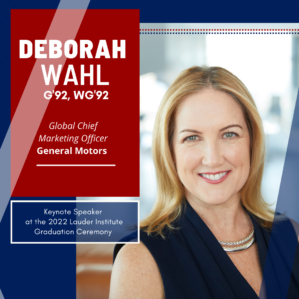 Deborah is the Global Chief Marketing Officer at General Motors.

Upon graduating from Lauder in 1992, Deborah followed a fellow Lauder graduate to W.L. Gore in Europe, settling in Paris and working to launch a new product line for the company. After Paris, Deborah worked as a marketing manager for Ford in Sao Paulo, Brasil, then moved on to Toyota in 2001 where she spent extensive time in Japan. Her obsession with culture, data, and customer insight drove her to work at the top levels of marketing for some of the largest global consumer companies. Deborah was appointed General Motors Global Chief Marketing Officer on Sept. 1, 2019. Prior to joining General Motors, Deborah served as the Senior Vice President and CMO for McDonald’s US from 2014 to 2017, during which time she played a key role in the brand’s turnaround, proudly bringing All Day Breakfast to McDonald’s consumers. She has also held a number of marketing leadership positions at PulteGroup, Chrysler and Lexus. She has been nominated to the Forbes Most Influential CMOs list and received the CMO Club Hall of Fame Award in 2021, as well as the Automotive Hall of Fame Industry Influencer Award.

Deborah earned her bachelor’s degree in Economics from Wellesley College, an MBA from The Wharton School, and a Masters of International Studies from The Lauder Institute, University of Pennsylvania.

Deborah is a board member at Groupon and the Chair of the MMA Global Board. She is also passionate about contributing to her community, serving on the Board of Trustees of Cranbrook Educational Community, Friends of the Children – Detroit and the Wellesley Business Leadership Council.

The Class of 2022 ceremony will be held on Sunday, May 15. Attendance is restricted to graduating students, their families, and invited guests. Please contact Lauren Treutler at treutler@wharton.upenn.edu with any questions.