The Asia Competitiveness Institute (ACI)–World Bank Greater China–India Economic Forum was held at Lobby of Oei Tiong Ham Building, Lee Kuan Yew School of Public Policy, National University of Singapore, Singapore on September 2nd, 2016. Jointly organized by ACI and the World Bank Group, the forum brought together a select group from industry, academia, and government to discuss ways of strengthening growth and competitiveness of the Indian and Chinese economies.

ACI is committed to contributing to the understanding and enhancement of economic growth and living standards through undertaking rigorous research on policy issues relating to the competitiveness of clusters and comparative regions in Asia. ACI’s research focuses on growth and competitiveness analysis of sub-national economies in Asia, city-level studies on livability as well as firm-level research on productivity and management efficiency. The meeting, therefore, focused on national, regional, and provincial competitiveness analysis of both the Chinese and Indian economies. The forum also addressed the impact of real effective exchange rates on foreign direct investment inflows to economies of Greater China and sub-national economies of India and discussed the role and impact of think tanks in enhancing economic growth in both countries. 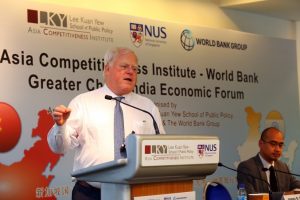 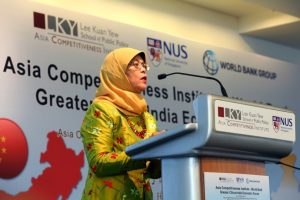 Dr. Halimah Yacob, Speaker of the Parliament, Singapore was the guest-of-honor at the forum. Dr. Halimah Yacob is Singapore’s first woman Speaker of Parliament. She has been a Member of Parliament since 2001 and is one of the MPs serving the Marsiling-Yew Tee Group Representation Constituency since 2015. She had previously served as the Minister of State in the Ministry of Social and Family Development from 2012 to 2013. As an MP, she was also a Member of the Public Petitions Committee before assuming the role as Chairman of the Committee of Selection, Committee of Privileges, House Committee, Public Petitions Committee and Standing Orders Committee since 2013. She was conferred the Honorary Doctor of Laws by the National University of Singapore on 7 July 2016 in recognition of her distinguished career and service, particularly in the government and public sectors.

Dr. Halimah Yacob was invited to the forum to deliver the opening remarks. During her speech, she emphasized the importance of a holistic and sustainable approach to promoting business and investment, “focusing not just on government incentives, but also creating a wider ecosystem that allows businesses to thrive and succeed.” She also highlighted the need to share experiences and to learn valuable lessons from each other. Dr. McGann met with Dr. Halimah after the opening remarks during a private conversation between guest-of-honor, distinguished speakers and VIP guests moderated by Eduardo Araral.